I recently received this comment on my post on John McLaughlin's Double Rainbow from reader Jeff Saginaw who claims to have owned the original Ibanez 2670 Artwood Twin prototype! 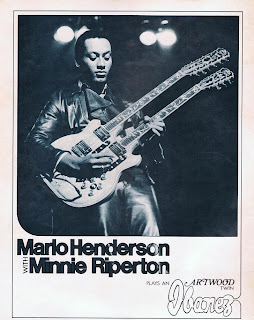 "Hi- I owned the prototype of the Ibanez McLaughlin double neck. It was purchased by Hollowood Music in McKees Rocks, Pa at the Dallas, Tx Namm Show and flown back to Pittsburgh wrapped in a blanket in it's own seat on the plane since there was no case built yet.

I sold it many years ago when I was in Chicago and the owner will see that if he unscrews the pickups on the lead neck he will find 2 PAF's I installed from my 58 Les Paul Custom. I put DiMarzio Super Distortion pickups in the neck and bridge of the 58 (who knew) and put the PAF's in the double neck since the original pickups were (well) less than PAF's so to speak.

It was an ok playing guitar and did a few trips to Bermuda and the UK with me. It was really heavy! I bought a wide hand tooled leather/sheepskin backed strap to hold it that was later stolen in Puerto Rico. I'm Jeff Saginaw--ask anybody in Pittsburgh or Chicago about or call me."

Thanks for that slice of history Jeff!  That was pretty informative!

Here's a link to a reissue Ibanez 2670 Artwood Twin recently found on eBay.  A little less ornate than the original but still breathtaking nonetheless.

Posted by Clinton Carnegie at 1:11 AM