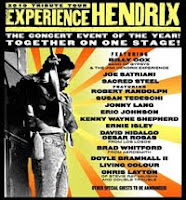 The following tour dates and venues have been announced with some already sold out!:
Check out http://www.experiencehendrixtour.com/schedule for more details and artist performance roster.
Posted by Clinton Carnegie at 9:05 PM