I've always said that to call oneself a serious electric guitar player one had to own the Big 5 of guitars, namely a Stratocaster, a Telecaster, a Les Paul, an ES335 and an SG.

And owning a Gibson SG has been on my wishlist for a number of years now. As a teen who listened to Cream with Eric Clapton, my ideal SG had to be a '61-style with the small pickguard instead of the larger 'bat wing' version. Maybe I saw too many of those with rusting screws given the owners' penchant for sweating like Angus Young while banging out Back In Black in front of their bedroom mirrors. You know who you are..

In all seriousness, I've always felt that in the case of the bat wing, where the pickups are mounted directly to the plastic pickguard, the tone of the instrument is softened and tamed down somewhat. The whole guitar just seems to resonate differently.

For maximum wail you need the pickups on mounting rings. There's an immediacy to the response with the pickups mounted Les Paul-style, standing tall and proud. Although Angus sounds absolutely fine with either configuration. 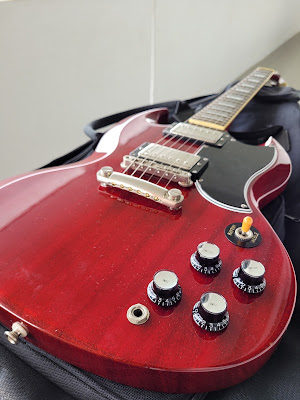 Shot Down In Flames
I had actually ordered a '61 Reissue Gibson SG from Ishibashi back in 2017. Having paid in full I was informed that since the guitar had rosewood as one of its wood components there was a need to obtain a certificate stating that the rosewood was harvested pre-2017 when CITES was enforced. Utter madness if you ask me.

Imagine making it compulsory for musicians to apply for CITES permits, a process that took months, just because of a skinny slab of rosewood for the fingerboard or else they wouldn't be able to travel with their instruments. Thank goodness common sense prevailed -- eventually -- and the restriction on musical instruments was lifted in 2019.

And that SG? I never saw it.

According to Ishibashi they could not prove with certainty that the guitar had been made before 1st January 2017, the cutoff CITES date for export certificate approval.  And never mind that this was a 2011 model. Apparently Gibson's serial numbering system and date stamp on the back of the headstock holds no weight with Japan's CITES office.

Anyway, all was good, I got my refund and I put it down to experience despite the 2-month wait.

Since 2017, Ishibashi's used prices of '61 Reissue Gibson SG's have risen dramatically to regular Les Paul Standard levels. Any notion of having an SG to round off that part of the collection seemed to fade -- as I distracted myself with other guitars. Until the other day. 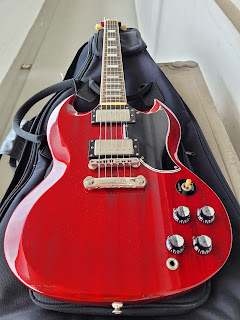 Shot In The Dark
Browsing Ishibashi's U-Box I came across this rather mint looking Tokai SG118 from 2006. Having purchased a Tokai LS173 gold-top Les Paul copy a while back and being thoroughly impressed with the workmanship and faithfulness to the original Gibson specs I decided to spring for the Tokai SG. And it was just a little more than a third of the price of a new Gibson '61 Reissue SG.

Doing a little research, I found that Tokai derived it's model numbers from the prevailing Japanese yen price of that instrument at the time it was manufactured. The Tokai SG118 would therefore have retailed for ¥118,000 in 2006. The same guitar with the same specs today is listed as the SG124 due to its current price.

Imagine if Gibson had adopted this scheme for its ES175 or ES335 guitars. What an interestingly phenomenal mess it would have been.
Shoot To Thrill
The Tokai SG118 is part of their Japanese-made Vintage series and features the following specifications:
One-piece mahogany set-neck with 18 degree headstock angle
Rosewood fingerboard
Two-piece African mahogany body
Tokai PAF vintage-voiced Mk II humbuckers
Kluson-style tuners with green tulip buttons
Tune-o-matic bridge and stopbar tailpiece 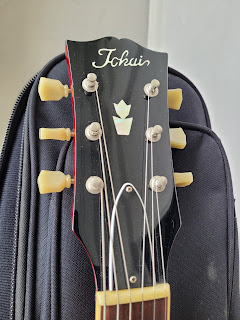 Big Gun
The guitar was well-packed and shipped in Ishibashi's new carton with guitar graphic which basically made the contents known to postal workers to Handle With Care. At any rate it's always a bit of a crap shoot shipping guitars by regular mail.

The guitar arrived with strings slack -- always a good idea when shipping or travelling with a guitar -- in a decent quality non-original soft case. And of course I had to do the obligatory taps on the back of the neck to check for a rattling truss rod which could indicate a break. There was a rattle but I traced it to the front pickup being adjusted a little too low and there not being enough torque on the pickup mounting springs. A little quarter turn of those flathead screws, just like how you would find on an actual vintage SG from the '60s, fixed the rattle.

Ishibashi inspects, sets up and does a string change for every guitar that ships out from their U-Box, and this one played like butter when I tuned it up. The neck relief was set up just how I like it -- almost straight -- although I will admit to lowering the action just a tad at the bridge. The intonation was dialed in perfectly. 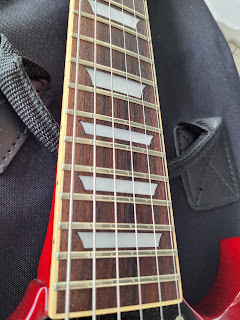 True to '61 specs, the necks on the Vintage series Tokai SGs are a little on the chunkier side and the frets are medium low. There are no fret nibs on the 118 and the frets extend to the end of the fingerboard. Fret nibs on the binding are reserved for Tokai's Premium series guitars. One niggle I have with mid-priced Japanese guitars though are their glaringly white acrylic inlays. This one is no exception. Again, like fret nibs, the yellowed acrylic inlays are found on the higher end instruments such as the Tokai LS173.

For Those About To Rock
So what is it about SG-style guitars that makes them unique. For one, the thin slab of mahogany that makes up the body has a lot to do with its tone. There's an organic quality to the sound as the wood vibrates a lot more than, say a Les Paul with a certain spank and 'wiry-ness' that translate into a petulant snarl when plugged into an overdriven amp. Want to sound like an absolute vandal on guitar? The SG is it. 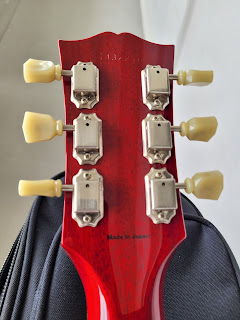 Posted by Clinton Carnegie at 1:36 AM No comments: