Built around the same innovative fusion of wood and acrylic as its more expensive siblings, the SS Series features flat, non-contoured bodies and standard 'vintage' humbuckers instead of the hand-wound Amalfitano pickups. According to the company's website, the flat bodies offer a considerable cost-savings in labour which the company is glad to pass along to the customer. 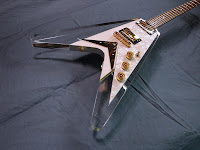 
Now about those acrylic wings. 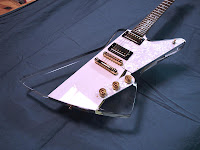 Steinberger have tried it in the past with varying degrees of success. These instruments were either graphite necks bolted to wooden bodies, or wooden necks grafted to Lucite/acrylic bodies. Even MusicMan jumped on the 'space-age' materials bandwagon once with a limited-run graphite-necked variation of their famed Stingray bass.

Leaving the 'tone' part of the guitar intact -- the strings resonate on a wood neck set into a wood body center-block where the bridge and pickups are also mounted -- the acrylic wings serve only to absorb some of the random resonant frequencies you would find in an all-wood guitar, focusing and compressing the tone.


And at the considerably reduced prices of the SS Series, a Bell guitar is now well within reach of most musicians who might be considering trying something new. Are you feeling it?

(Pic Source: www.bellcustomguitars.com)
Posted by Clinton Carnegie at 4:16 AM