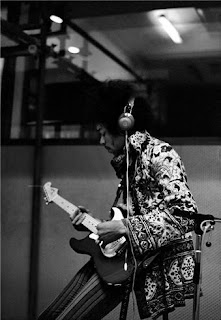 But anyhow, if you've always wanted to jam along with Mitch Mitchell's and Noel Redding's actual drum and bass tracks now's your chance.  No need to break into the Hendrix vaults here, because Eddie Kramer's already raided his own archives and beat you to it!

This set of original studio tracks, as recorded by The Experience, sans Jimi's lead guitar for the most part, provides an intriguing glimpse into rock history.  It's been written about before but to truly appreciate what an absolute monster of a rhythm section Noel Redding and Mitch Mitchell were, you have got to check this out.

Pardon the French but damn did they make Jimi sound good!

And here's a handy list of track notes, keys and tunings that are part of this set:

PURPLE HAZE * Key: E Major
Guitar bleed is heard through drum and bass mics, is below 1%. You can finally hear Jimi's Oooohs and Ahh's.

WAIT UNTIL TOMORROW * Key: Ab Major-1/2 step down
First Chord Slams, then the bleed is above 1% due to the laid back drums, but gone when band kicks in. Hendrix Rap is classic. Background Vocals are a gas.

FOXY LADY * Key: F# Minor
Rhythm Guitar bleed is below 1%. This was a 2 Guitar track recording, so the lead guitar track is out and there is no bleed, Killer Bass

AXIS BOLD AS LOVE * Key: Ab Major-1/2 step down
Probably contains the loudest guitar track out of this collection. Recording of this Epic song was very open, and when you now hear it...you can understand why.

CROSSTOWN TRAFFIC * Key: C# Major-1/2 step down
What you hear on this track is NOT a guitar, but a KAZOO that Jimi played to emulate a second guitar doing harmonies.

FIRE * Key: D Minor
This track is the cleanest of the bunch, which leads to believe that the drums and bass were recorded alone, or that Jimi's amp was in an isolation booth.

FREEDOM * Key: C Major
Again here is the obvious use of a cleaner recording style, as there is no guitar bleed whatsoever. Nice Clav work that you can hear now. Also checkout the double track vocals by Jimi.

MACHINE GUN * Key: D Minor-1/2 step down
The new recording style pays off here also as the guitar tracks again have no bleed. There is an extensive count-in click.

POWER TO LOVE * Key: B Minor-1/2 step down
The later recording style again, this cut is taken from a studio version of the song. Guitar bleed in non-existent. You can now hear the heart of the 2nd stage rhythm section.

Head over here for a preview of the tracks.

Posted by Clinton Carnegie at 7:41 PM