I just received word from a friend that today is jazz guitarist O'Donel Levy's birthday.

I first met O'Donel, or 'O.D.' as he preferred, when he came to my neck of the woods way back in 1983.  The guitar player for flautist Herbie Mann's quartet, watching this guy totally blew my mind and had me rocking back and forth swatting at imaginary insects.  The experience was life changing. 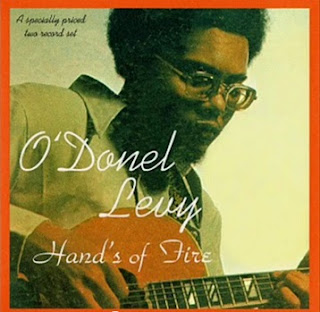 At the afternoon jazz workshop prior to the concert that same night, OD really put his blonde Gibson Super 400 through its paces.  It seemed like he had it all down -- great tone, boundless vocabulary and incredible chops, all enveloped in an incredibly funky rhythmic sensibility.  You know, one of those cats who could play three notes and have it scream 'jazz!'.

After the workshop, me and a buddy of mine approached OD as he was putting his guitar away.  He seemed genuinely happy to talk to us and answer our guitar geek questions.  A really nice guy.  I felt like I was meeting Santa Claus.

The gig came and went.  But the impact of OD's playing on me remained.  The cassette tape on which I recorded the concert became regular listening -- the terribly hissy, low-fidelity recording I made with my little Walkman recorder permeated nearly every afternoon at my house after school.  I played it so much, my neighbours had Memphis Underground embedded in their collective consciousness.  And believe me, they were not jazz folks.

And yep, I was a bootlegger. Even then.

Fast forward a few years and OD takes up residence in Singapore, landing a gig at the local Saxophone Club.

I know.  I couldn't believe it myself.  One of my guitar heroes, playing a local bar, six nights a week.  And out came the Walkman recorder again.

His Saxophone gigs prove to be another eye-opener.

Performing in a bass-drums-guitar format, OD proceeded to reinvent the power trio.  A pretty decent vocalist, his shtick was taking crowd-friendly, danceable tunes -- anything from the latest Top-40 hit to Kool & The Gang and Marvin Gaye -- and pulling it off with aplomb, often spicing things up with a killer solo in between.  If there was a horn part to be played, OD was voicing it right there on his guitar.  And he was as likely to blaze through a bebop tune mid-set, just for kicks.

Lesson learnt.  The only musical limits are ones we set up for ourselves.

OD is back in Baltimore, Maryland now.  I'd heard he is not in the best of health, but is working hard to recover facility in his hands so he can play again.  And if there is a man who deserves to play, it is this one.

OD, thank you for being an inspiration to me and many others.

Posted by Clinton Carnegie at 5:44 AM