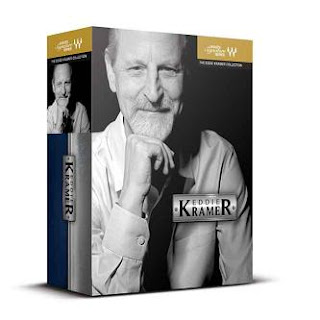 Working at Olympic studios as staff engineer in the 60s, Eddie Kramer helped a certain rock guitar legend revolutionize the art of recording .
When Olympic studio relocated to Barnes from London in January 1967, Jimi Hendrix was among the first artists to record there.
To create the sonic soundscapes that Jimi envisioned, and given the limitations of only 4-track machines to record with at Olympic, tracks had to be recorded on one 4-track, ‘comped’ (compiled into a stereo mix), and then bounced to 2 tracks of another 4-track machine.
Needless to say that everything had to be exactly as they wanted it as there was no way to modify or undo tracks once they were comped and bounced.

Says Kramer of his time working with Hendrix, “When he played the guitar.. it’s the guitar, the hands, the heart, the brain, it all became one. When he played a chord or played a solo, it was so telling, so vibrant and so unusual that people were just attracted to it. My job was to capture the sounds.”
In collaboration with Kramer, WAVES has introduced their Eddie Kramer Artist Signature Series of software plug-ins.
Designed to work on various digital audio platforms, this software bundle is designed to give anybody immediate access to Kramer’s recording expertise by way of his personal EQ, compression, reverb and echo settings for each different instrument group. According to Kramer, the plug-ins “ reflect some of the sounds I‘ve created over the years, so the end user can call up an Eddie Kramer vocal sound, guitar sound or drum sound.”
For the guitar plug-in, Kramer designed a “good overall rock guitar sound” -- something he has come to be identified with considering his work with Hendrix and Jimmy Page -- with a punchy EQ in the midrange, compression, reverb and slap echo. Slap echo, Kramer feels imparts a much needed analog quality.
For the inexperienced home recording buff as well as the budding professional engineer , Kramer has taken the guesswork out of trying to figure out all the various EQ and compression settings for drums, cymbals, overheads, bass, guitars and vocals. The end user gets a great starting point, eliminating hours or even days ‘tone-chasing’ in the studio.

Posted by Clinton Carnegie at 6:31 PM