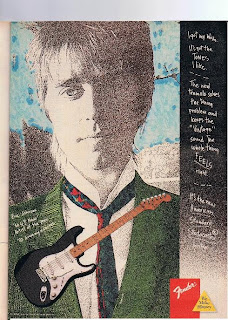 Here's a Fender American Standard Stratocaster ad featuring Eric Johnson from 1988.
At this time, Fender had yet to fully realise the sheer marketing potential of artist signature models -- the Eric Clapton Stratocaster was launched only in 1988 -- and the as yet undiscovered goldmine that was to be the Custom Shop.
After languishing in economic turmoil for much of the early 80's, Fender Musical Instruments was bought over from CBS in 1985. Under its new owners, a revamp of the product line was initiated.
One of the new and improved products, the American Standard Stratocaster, was launched in 1986.
Featuring a 22-fret neck with a flatter radius and medium-jumbo frets, hotter pickups with TBX tone control and a newly designed two-point pivot bridge with aluminum saddles, Eric Johnson gave his ringing endorsement to the American Standard Stratocaster, as depicted in this ad.
And Fender would have scored a major marketing coup if they had repackaged the American Standard as the Eric Johnson signature Strat.
But then again, hindsight is always 20/20..
Whatever the case may be, the marketing geniuses at Fender are more than making up for lost time with the seemingly boundless -- and expensive -- output of the Fender Custom Shop.

Posted by Clinton Carnegie at 2:43 AM