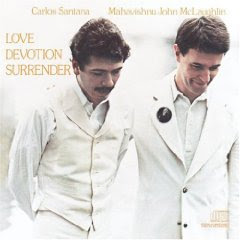 My first article on The Spiritual Sayings Of Carlos Santana proved somewhat popular. I guess Carlos' nuggets of wisdom struck a chord in quite a few people.

In light of that, here are some more.

This time I've divided them into two sections. The first are from a 1974 interview he did around the time of the release of Love, Devotion, Surrender with John McLaughlin. The rest are from a 1999 interview he did after recording his multi-award winning record, Supernatural. It's interesting to see how Santana's perspectives have evolved over 25 years.
1974

"A lot of times, what I hear and what the Supreme hears are two different things."

"Sometimes I find myself living in the illusion that I've got to do it the way I hear it. But when I do that, it doesn't come out right, it sounds too thought out."

"I am the string and the Supreme is the musician. And that's all I am, because I go out of tune just like a string goes out of tune."

"I've got a long way to go before I can be in any kind of environment and still keep that oneness with the Supreme, so I don't start swearing and trying to be stupidly proud."

"Sometimes I'm not aware I can do some of these things on my guitar, because in reality I'm not doing them, they are being done through me, which is one of the highest places anyone can reach."

"For Leonardo daVinci to reflect all his artwork, he had to get his chops out before he could try to reflect all that perfection the Supreme gave him."

"There's only one king, man, and that's the Supreme. And when he plays through you, according to your capacity, it's like music from beyond, and that's what I'm hungry for."

"If I'm not practicing my guitar and my technique, I'm reading certain types of books which make me constantly aware of how much conviction, surrender, devotion I have to have so that I don't go out of tune. So when I play, all those doubts and wrong notes don't come into the picture."

"Some music just goes right over you, and you start yawning. John Coltrane's music used to do that to me. It's so heavy it's like eating a big meal. But after a while I got hungry for it."

"I had only one concern when making my new record (Supernatural). Would Jimi Hendrix like it if he were here?"

"It's important for me to appease Jimi and Wes Montgomery because I play for them too."

"We are multi-dimensional spirits dwelling in the flesh, solely for the purpose of evolution."

"I don't see myself playing black music or white music. I play rainbow music -- all the colors are there."

"Like Miles -- you know when you hit that note, you don't want to breathe until you finish with it. Miles, Peter Green -- there are very few people who can make you hold your breath until that note is ended. You get goosebumps."

I love musicians who make you want to laugh and cry at the same time. When they go for it, you go with them, and you don't come back until they come back. There are not many players who can consistently do that. Potentially, we should all be doing it."

"From Miles you get the alchemy of making 50,000 notes into five. But with those five, you shake the world."

"You don't have to be Jimi Hendrix or Charlie Parker -- you can get it done your own way. God made the world round so we can all have centerstage."

"The secret of life is that I have validated my existence. I know that I'm worth more than my house, my bank account, or any physical thing."

"Once you validate your existence, you have the wind in your sails -- where do you want to go?"

"These are the ingredients for being a complete communicator: Soul, heart, mind, body, cojones. One note."

"Late at night, if I want to check in with my internal Internet, I load the tape recorder, get some nice tones, and play."

"The only thing that I have is my tone. That's like my face. Your tone is your fingerprint and your personality. I learned by listening to T-Bone Walker and Peter Green, so I have a tone."

"Attitude is as important as notes. You learn not to be intimidated. You learn to respect and find your place -- to complement."

"There's cursing and praying, and all that language is part of music. A lot of my best solos remind me of when my mom used to scold me, 'Dit-doo-dup-dat-doo-doo-bah!"

"When you get older you either get senile or become gracious. There's no in-between. You become senile when you think the world short-changed you, or everybody wakes up to screw you. You become gracious when you realize that you have something the world needs, and people are happy to see you when you come into the room."

"Whether you've got a green mohawk or a suit and tie, it's still the same. Are you saying something valid. Are you contributing, bringing new flowers that we haven't seen in the garden?"

"When you think, 'I should hang up my guitar and be a dishwasher,' listen to your other side: 'No, you too have something they need'."

Posted by Clinton Carnegie at 1:51 AM