Following up on my article on the plight of laid-off Cort guitar factory workers, it looks like some prominent guitar folk are getting involved. 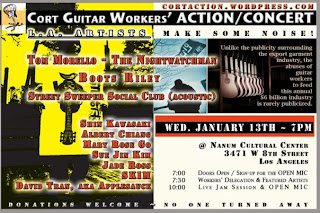 Rage Against The Machine guitarist Tom Morello showed his support at a recent Cort Action Solidarity concert on January 13.
The concert, dubbed A Night of Guitars, was staged during NAMM 2010 week in Los Angeles while guitar manufacturing bigwigs were in town.  In addition to their own guitar line, Cort also supplies Fender, Ibanez, Gibson, Lakland and ESP.
Morello also issued this statement: 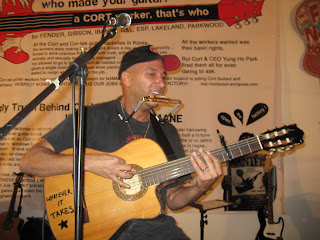 “Guitars should be a means to liberation, not exploitation. I fully support the Korean workers’ demands for justice in the workplace. All American guitar manufacturers and the people that play them should hold Cort accountable for the awful way they have treated their workers. Without us, they would go out of business. Simple as that. No one should have their job taken away because they stand up for their rights.”
Fender apparently, is the first to step up to the plate and will be conducting their own investigations into the Cort guitar factory lay-offs.

(Pic Source: http://cortaction.wordpress.com/)
Posted by Clinton Carnegie at 3:16 AM