The following interview with Ceriatone's Nik Azam is excerpted from my hour-and-a-half long visit: 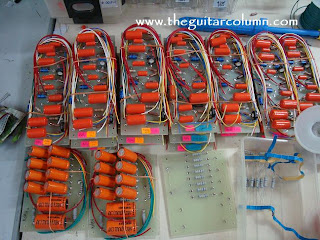 The Guitar Column: I see you use a lot of orange capacitors on your circuit boards. Some have been labelled 'Holy Grail'. Care to share with us what that's about, or is it a trade secret?
Nik Azam: They're no secret -- the orange capacitors are made by Sprague. They are the only ones that will give the proper sound. The Holy Grail electrolytic caps are made locally in Penang (to Ceriatone's specs). It's an availability issue for these if we have to order it everytime from the US.

TGC: I see from your website that you also offer your amps in kit form. Of course putting an amp together from scratch is no simple matter.

NA: Yes, a certain amount of (electrical) knowledge is presumed on the part of the builder. It's an experience for the beginner who wants to learn to put together their first amp. 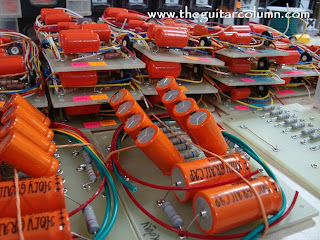 TGC: Then there is the issue of tube biasing. From what I know it can be dangerous if you're not sure of what you're doing.

NA: Biasing is easy once you know how to do it. And if the customer needs it, I will give them step by step instructions so they can (safely) do it themselves. And it's really not that difficult.

TGC: Do you think there is a difference in tone between amps with printed circuit boards (PCBs), and handwired amplifiers with point-to-point wiring?

NA: No there shouldn't be any difference. But the reason the big manufacturers use PCBs is that they are trying to squeeze in as many features as they can. This means that they have to substitute parts with smaller (alternative) components and that can affect the sound. 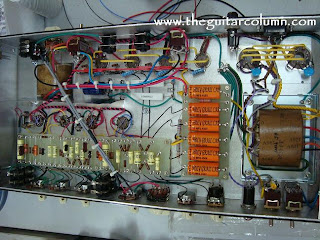 TGC: How did you happen to come across the Dumble circuit? Dumble would put black epoxy over his circuit to conceal the parts.

NA: A couple of Dumbles were actually 'de-gooped' a few years ago, probably using some chemical agents to remove the epoxy. The parts were revealed and their values measured. After that it became public knowledge on the amp forums in the States.

TGC: What is the Overtone S&M Special?

NA: It's based on our Overtone Special. There are some mods in there that were created for two very early customers of mine, friends really -- Sami and Marin. Of course there's the double entendre of 'S&M'..

NA: Technically there should be no difference -- you're just using different leads on the transformer to adjust for the different voltage coming in to the amp -- 110, 120, 220 and 240v.

The change in sound in those Matchless amps may be because of some minor damage during shipping -- things can get moved around inside during shipping, altering the tone. 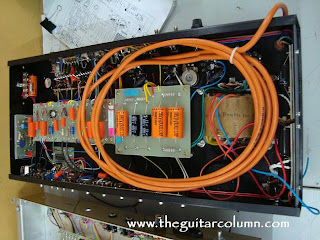 TGC: What do you think of the opinion that birch ply is the best wood to use for amp cabinets? Some people swear that birch plywood is the only way to go for the tone.

NA: Marshall started using birch ply simply because it was available and it wasn't expensive. Wood availability is a function of geography. In Malaysia of course, birch is not available. We use marine-grade ply made of local hardwoods.

TGC: I notice on your shelf over there that you have several face-plates marked with the word 'reject' on them. To be honest, I can't spot anything wrong with them -- your quality control standards must be very high.

NA: All our face-plates use the traditional silk-screen method for the lettering. Sometimes there is a little smear or imperfection somewhere (on the lettering) so we reject it. Because we're in Asia and we sell amps around the world, sometimes a small imperfection can get amplified. And nowadays with the internet, word spreads quickly.

We went through seven different vendors before we settled on one who could make our face-plates with a low rejection rate.

TGC: What about the grille cloth on your amps? They look good -- are those from a local supplier?

NA: I get them from China. I have to purchase a minimum of 10,000 meters of fabric before they will sell them to me. The best time to purchase parts from China is at the end of the year when vendors are trying to sell off their stock for the year.

TGC: Do you make your amp cabinets in-house?

NA: I get the cabinets made (by a vendor) -- a two-man operation makes them. No CNC machines. They build the cabinets by hand using marine ply and regular dowel joints and then cover the cabinets with black Tolex. We do get requests for other colors but I try to keep it simple -- it's available in any color as long as it's black!

We have only four basic cabinet types for our amp heads -- we try to streamline operations.

TGC: What speakers options do you offer? And what about speaker ohms -- does that affect the sound?

NA: We use Celestion speakers mainly, or Jensens. Based on the output of the transformers, 16 ohms will give the fullest sound. But it also depends on the number of speakers you're using, the type of speaker, whether they're wired in series..

TGC: Which is your most popular amp model?

NA: It depends on the flavor of the month. One month it may be the JTM45, another the TrainWreck clone. But for the last couple of years the Overtone Special has been hands-down the most popular.

TGC: I have to ask -- of your entire line, which amp are you most proud of?

TGC: To be more specific, given your entire amp range, which one would you choose to take to a gig?

Posted by Clinton Carnegie at 12:32 AM