It's Golden -- The Birth Of The Gibson Les Paul 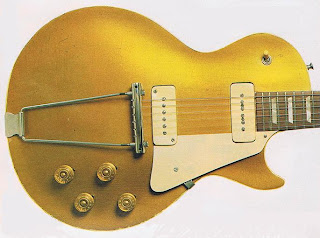 The Broadcaster, Fender's first widely marketed solidbody, was a runaway success. With a retail price of $170 in 1950, the utilitarian design -- little more than a maple neck bolted to a plank of wood with simple electronics -- was easy and cheap to manufacture.
And the Broadcaster -- soon to be renamed the Telecaster -- was to be something of a thorn in the side of Gibson's president, Ted McCarty.
On the one hand, he was eager to have Gibson launch their own solidbody electric guitar. At the same time he was being pressurized by his compatriots at other companies who were strongly advising him not to do so as this would legitimize the abomination that was the solidbody electric guitar!
Realising the enormous sales potential of a Gibson-made solidbody, McCarty set the engineering wheels in motion in November 1950 for what was to become the first Les Paul model, soon after the Broadcaster appeared on the market.
Seeking to produce a solidbody of a higher calibre than Fender's, McCarty and the engineers at Gibson decided on a glued-in set neck and more sophisticated electronics. It was also decided that the guitar was to have a carved arched top, much like their hollowbodies -- Gibson had a special shaper that could carve the arched top, a machine that Fender did not have. In effect, they took most of the features of their hollowbody archtop line and incorporated them into a solidbody instrument.
Mahogany was decided upon as the body wood, but by itself it was dark sounding. Solid maple was also considered but it would have been too heavy and bright sounding used on its own. With a carved maple top glued to a solid mahogany body, the characteristics of both woods were fully realised, with the darker sounding tone of the mahogany countered by the bright sounding maple cap.
A few years earlier, Les Paul, the late guitar legend, had approached Gibson with his 'Log', hoping to sell them the concept of the solidbody electric and had been unceremoniously dismissed. With Gibson's new solidbody in the works, McCarty decided to approach Les Paul for design input as well as for an endorsement deal.
The final design included a 24 3/4" scale with 22 frets on a rosewood fingerboard, Kluson tuners and a 3-way toggle switch for selecting between the guitar's two P90 pickups. Each P90 had two Alnico 5 magnets wound with 42 gauge enamelled wire, producing a DC resistance of 8.66 k ohms. A cream plastic casing enclosed each pickup.
McCarty presented the prototype to Les at a recording session in a mountain lodge in Pennsylvania. An endorsement agreement was reached that night, and Les would receive a 5% royalty for every guitar sold for a period of 5 years.
The Les Paul model, as it came to be known, was launched in mid-1952 and priced at $210.
At Les' suggestion, the guitars were available only with a gold-finished top, further characterizing it as a luxury instrument.
At Les' suggestion also, the bridge with a trapeze tailpiece (as shown in the pic) was installed as a standard feature. But because these early Les Pauls were made with a very shallow neck pitch, the action was too high, even when the bridge was set at its lowest. To counteract the problem, Gibson started wrapping the string under the bridge instead of over it, which helped in lowering the action. But it also meant that Les Paul, the guitar's sole endorsee, could not incorporate his trademark palm-muting technique with this setup. Intonation was also inaccurate with these early bridges.
According to Les, these design flaws were the result of a gap in communication between himself and Gibson's engineers. When Gibson sent him some of these guitars, he immediately called them to stop production and fix the problem, which was primarily the result of the neck pitch being incorrect.
In January 1954, the trapeze was replaced with a single bar tailpiece design that was held by two bolts set into the guitar's top. The neck pitch was also increased which meant the guitar became more playable with lower action and improved intonation. In 1955 the tune-o-matic bridge was introduced on the Les Paul goldtops, allowing for extremely fine intonation adjustment, delegating the stud tailpiece to the sole purpose of anchoring the strings.
Like the Broadcaster, the Gibson Les Paul model was a huge success upon its release, and in its many marketing incarnations, proves to be golden til today.

Posted by Clinton Carnegie at 3:27 AM