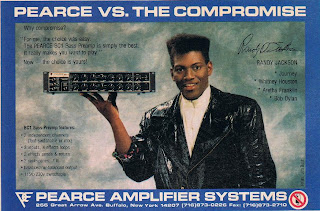 Here's an ad from 1988 of our favorite American Idol judge endorsing a bass amplification system.

Randy Jackson was -- and still is -- a great musician, bassist, songwriter and producer.

After a lengthy stint as an in-demand studio musician and sideman, recording and/or touring with the likes of Bobby McFerrin, Sister Sledge and Chaka Khan's band Rufus, he soon found himself rocking the pop arenas with Journey -- check out his bass grooves on their album Raised On The Radio.

A well-trained musician, Jackson studied string bass while at Southern University in Baton Rouge, performing with the university's orchestra. After winning a national endowment grant, he went on to study under legendary studio bass player Chuck Rainey, from whom he learned many aspects of studio musicianship and recording.

He returned to university after studying with Rainey, which was where he met Billy Cobham who was conducting an ensemble clinic. As luck would have it, Cobham was also auditioning bass players for his band. Jackson landed the gig, beginning a 2-year stint in the fusion master's group, which also yielded two albums, Simplicity of Expression, Depth of Thought and Magic.
From these early beginnings, Jackson went on to a stellar career playing on and producing numerous albums for the likes of Bob Dylan, Madonna, Michael Bolton and Mariah Carey, to name but a few.

From being an in-demand session bassist, songwriter, record label executive and producer to TV celebrity judge, there isn't much in the music industry that Randy Jackson has not played, seen or heard.
Posted by Clinton Carnegie at 4:01 AM