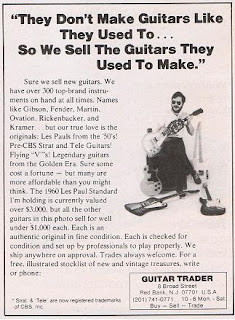 Before you go reaching for that credit card, this is a Guitar Trader ad from 1979.

And vintage guitars continue to be quietly traded to this day, bought and sold by affluent collectors and players who speculate that prices will sky-rocket even more.

Interestingly, in the early 80's, Guitar Trader cooperated with Gibson to release a limited production run of Les Paul's made to 1959 specs -- probably one of the first such production partnerships.

The guitars were produced in Gibson's old Kalamazoo, Michigan factory and were extremely faithful reproductions thanks to the vintage experts at Guitar Trader who pursued replicating all details of the '59 Les Paul Standard to the nth degree.

Posted by Clinton Carnegie at 2:12 AM