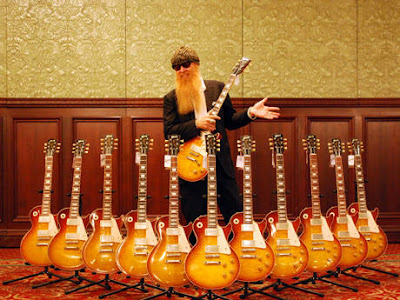 Interestingly, Gibson first began mentioning the long-tenon joint only recently -- in their ad campaigns for Slash's signature model in 2008. It makes one wonder if this tone-enhancing feature -- there is better string-energy transference throughout the instrument with it -- was left out in Gibson's earlier attempts at the '59 reissue.

Gibson is producing 350 of these instruments of which 250 will receive Gibson's Vintage Original Spec (VOS) finish. Another 50 guitars will be aged with every ding and wear spot of the original Pearly Gates replicated exactly. To top off the collection, the remaining 50 will be similarly aged and signed and played by Billy himself.

As a side note, the price difference between the aged model, and the aged and signed model is around 10 grand -- making the value of Mr Gibbons signature the highest among the living rock legends. Hmmm..

Posted by Clinton Carnegie at 12:22 AM