A few years ago, one of my guitar heroes, Allan Holdsworth, made a rare visit to my neck of the woods. 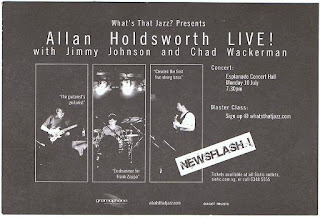 Fronting his classic trio with Jimmy Johnson on bass and Chad Wackerman on drums, the concert was hurriedly organized due to the band's last minute confirmation of availability.

According to a friend of mine who was a promoter for the event, they barely had two weeks to pull everything together, including advertising and publicity. But press on they did, in spite of the obvious commercial risks.

And my hat certainly goes off to them for that. Other show promoters, with their eye firmly on the bottom line would have balked and run a mile away under the same circumstances.

As an unexpected bonus, a guitar clinic with Mr Holdsworth himself was announced. After literally decades of listening to the Master, I had to be there for sure.


The guitar clinic turned out to be more of a mini-concert with both Wackerman and Johnson in support. Even with the simple sound setup, in what was little more than a small function room, the band sounded incredibly balanced and cohesive. Their chemistry, one could only construe, was the result of years of playing together.

From what I could gather, Holdsworth's entire sound was being generated by three Yamaha Magic Stomp boxes. Interestingly, the rest of his guitar amplification equipment were rentals, including a Fender Twin that I had played on when I did a gig backing up The Supremes(!) a week or so earlier.  I recognised it because of the small tear in the grille cloth. Strange parallels indeed.


During the break, the trio mingled with members of the audience wanting to get a closer look. Holdsworth, quaffing a can of Tiger beer, was in good spirits and didn't seem to mind at all that his guitar fans were picking up his prized Dunlap for a feel of its extremely low action.

I had the chance to chat with Chad Wackerman for a bit, asking him about his recent move back to the US. I had the pleasure of having Chad guest on a few tracks of my solo album 'Santiago' in 2004 when he was still living in Sydney. Definitely one of my favorite drummers in the world.

After the break, the band played a couple more tunes and then answered questions from the audience. It was interesting and enlightening to learn how Holdsworth, despite his stature in the guitar world, relies heavily on the input of his sidemen to form a tune. He presents new compositions to the band by playing the chords and melody line, leaving them to formulate their own drum parts and basslines. And whatever happens from that point is strictly a group effort.

No wonder these guys jump at the chance to play with him.

And what would a guitar clinic be if not for the usual detractors. An expat musician in our local jazz community took up Holdsworth on why he identified himself as a jazz musician when there was so little 'jazz' in his playing. This guy had obviously not heard Holdsworth blow over the intricate changes of Coltrane's Countdown.

"It's still bebop, man!", blurted bassist Jimmy Johnson, obviously annoyed and miffed at the subtle put-down. Did I mention these guys have a chemistry?

Perhaps the best question of the night was posed by another guitar buddy of mine who asked Holdsworth "How's the beer?", referring to the can of the local brew the maestro had just cracked open. Which best summed up the entire evening.

Posted by Clinton Carnegie at 12:15 AM