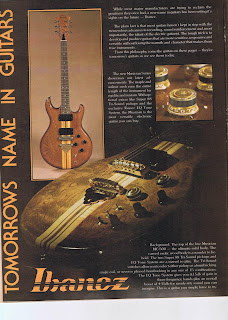 This is a two-page ad from the April '78 issue of Guitar Player.

(Yes, I actually own this issue -- Herb Ellis is on the cover).


In 1977 the Norlin Corporation sued Ibanez/Hoshino and its US distributor over design infringement. Norlin Corp. at the time owned Gibson guitars and the lawsuit was over the design of the headstock which Ibanez had copied and used throughout its Gibson-copy product line.

But it turned out to be a cat-and-mouse game as Ibanez had already changed their headstock design by the time the 1977 lawsuit was filed! An out-of-court settlement was reached and henceforth, all early 70s Ibanez guitars that sport the Gibson-style headstock came to be known as 'lawsuit' models.

1978 saw the emergence of many original Ibanez designs -- not due in small part to the legal hassles the company had been through.

The scan at the top shows the Ibanez Musician MC300 with passive electronics, multi-laminate neck-thru construction, heavy brass hardware and proprietary Super 88 pickups. The design is more akin to the basses made by Alembic than it is to anything Gibson ever made.

In the background is the Musician MC500 which was the top-of-line Musician model that sported active electronics and a 3-band EQ for bass, mids and treble. You'll not see that on too many guitars being made nowadays. Again, a distinct Alembic influence. 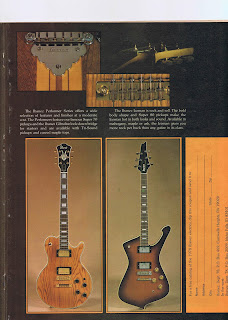 The pic at right shows a closeup of the Gibraltar bridge and tailpiece design. The late 70s was the era of heavy woods and even heavier brass hardware. It was a common belief among guitarists of the day that brass added a lot of sustain to an instrument.

This notion changed in the early 80s when a certain Allan Holdsworth started extolling the virtues of the natural resonance and the true sustaining advantages of extremely light woods and aluminum hardware! Brass blocks, he reasoned, were what were placed under violin bridges to dampen the sound when practicing.

The instruments depicted on this page are the Les Paul-styled Ibanez Performer with Tri-sound switching for humbucking, single-coil and out-of-phase sounds and, at far right, the legendary Ibanez Iceman.

The Iceman was the first original Ibanez design that was a radical departure from the conventional -- sort of like their take on the Gibson Explorer or Firebird. It was mostly closely associated with Paul Stanley of Kiss, who later had a signature model based on the Iceman. For some reason it never really took off. I feel it should have.

It don't get much more rock 'n roll than the Iceman..

Korean-made reissues in the early 90s were decently made but didn't capture the vibe and feel of the 70s Japanese versions. There is a new Indonesian-made version with an Ibanez Floyd-Rose type whammy bar. I haven't tried it so I'll reserve my judgement on this one. Ibanez should make a Japanese reissue Iceman that will probably sell like hotcakes around the world.

It will happen, I'm sure of it.
Posted by Clinton Carnegie at 2:37 AM