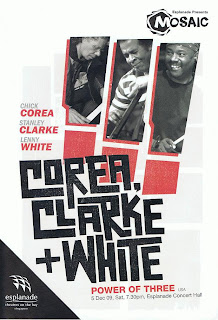 What can I say? Stanley Clarke has always been one of my favorite bass players.

When I was listening to the pioneering fusion groups of the 70's, I realised that Return To Forever alone had that complete balance of forces. Each member was a virtuoso. And no wonder -- a lot of their music was hard.

And holding down the bottom-end with Return To Forever with amazing dexterity and clarity of tone from his Alembic basses was Stanley.

Jaco. Marcus. Stanley. There are not many bass players whose first names have become synonymous with their instrument.

It was as a Return To Forever fan that I checked out their sold-out concert in Singapore on December 5th. The Return To Forever reunion tour with Al Di Meola did not make it to my neck of the woods, so when Power Of Three was publicised, I could not miss the chance.

Having recently stepped off what was undoubtedly a high-volume, electric Return To Forever reunion tour, Power Of Three was all-acoustic. The setting on the concert stage was intimate with the Yamaha grand piano facing the drums, and the upright bass in between. The instruments were set-up in close proximity like how they would be in a small jazz clu 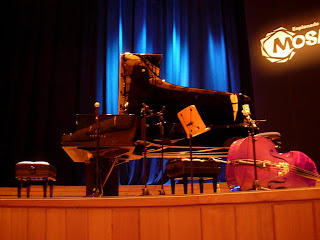 Now, a part of me was hoping that Stanley would play his Alembic electric bass. But watching him absolutely tear it up on the upright made me feel I was not missing anything. I was reminded of an excellent South Indian vegetarian meal I'd had 20 years ago -- didn't miss meat at all!

The trio brought a pretty varied set to the night's program. Their second tune, Waltz For Debby by jazz piano legend Bill Evans featured Stanley's first solo of the night. It was an education just watching the master at work. I realized about minute into his solo that it wasn't about his incredible chops, his impeccable intonation or the warm, clear tone he was getting from his instrument.

Everything he did hit at an emotional level. Whether it was ripping lightning fast pizzicato 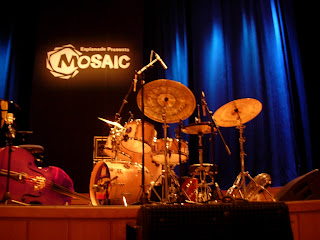 lines or executing a beautiful arco bowed passage, his technique was merely there to elicit an emotional response in the listener. Technique served the music and not the other way around.

The same could be said for Lenny White. From my vantage point in the first row (!), I really dug watching Lenny. A picture of concentration with his eyes closed, he was supremely alert and ready to interact and respond to any spontaneous rhythmic gesture from Chick and Stanley.
Lenny's solo on Corea's composition Bud Powell from his Remembering Bud Powell tribute concert was especially memorable. His ultra-taut snare, resonant, unmuffled kick drum and his unique touch on the cymbals bore the trademark early Return To Forever sound I'd become all too familiar with. Up close, I was surprised by how light his touch actually was, even on the heavier tunes.

Lenny plays with incredible freedom, and is a very instinctual player. And if he did make an almost imperceptible rhythmic error, he simply smiled, and played the 'mistake' again but with a different variation! In my humble opinion, any player who doesn't make a mistake when playing live is simply not reaching enough.

Chick brought the night through a few more jazz standards including Softly As In A Morning Sunrise and My One And Only Love. I especially enjoyed his extended piano intro on the the latter tune which was a study in his many reharmonization devices and Corea'isms.

The trio's revisit of the Return To Forever classic After The Cosmic Rain saw Corea losing nothing in translating his original synth and Rhodes keyboard parts to the grand piano. Lenny approached the first half of the tune in typical mainstream fashion before ramping it up toward the middle with his original heavy-hitting classic drum parts. If die-hard Return To Forever fans in the audience had been watching this concert with mouths open thus far, After The Cosmic Rain had their jaws touching the floor!

But the highlight of the evening for me was Corea's Concerto de Aranjuez piano intro to Spain, probably his most well-known composition. Impactful and introspective at the same time, there was a longingness in his playing. In those couple of minutes, he painted a musical picture of his entire life. Pure genius.

Interestingly, Corea chose not to play the main melody to Spain, letting Stanley's striding bassline dominate. Sometimes an artist needs to re-invent and play his composition a little differently, especially if it's a tune that's been played a million times at concerts, gigs and jam sessions around the world!

All in all it was a great night for music. I just hope that fans will not have to wait three decades for another reunion.

Posted by Clinton Carnegie at 3:28 AM