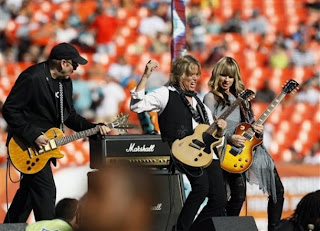 Orianthi is definitely making her rounds -- this time performing a solo rendition of the Star Spangled Banner for the opening of an NFL game between the Miami Dolphins and the Houston Texans in Miami on December 27th 2009.

The Aussie lass was later joined at half-time by Cheap Trick's Rick Nielsen and Brian Ray of Paul McCartney's band for a Gibson Guitar Tribute to Les Paul jam.

One of those rare occasions you'll see Orianthi with a Les Paul. And with a Floyd Rose to boot! 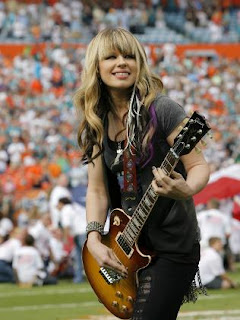 Posted by Clinton Carnegie at 4:42 AM