Here's a piece of rock history.  It's not often you'll find a vintage late 50's Les Paul for sale.  Let alone one once owned by a bona fide, card-carrying member of rock's elite. 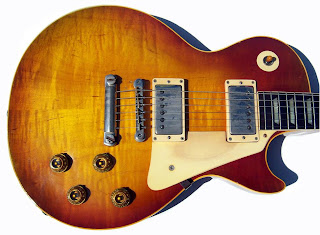 Used by Moore in several music videos and album cover photoshoots, he apparently owned this guitar from 1991 to 1994 before selling it to the present owner.

Granted this is not Moore's almost mythical Peter Green '59 Les Paul Standard -- methought he wouldn't have parted with that one for all the Leprechaun gold in Ireland -- but this '58 comes pretty close if you're looking to own a genuine rock n' roll artifact.

But as usual, do your research before committing and caveat emptor!
Posted by Clinton Carnegie at 8:30 PM