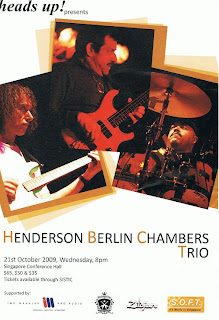 Last night the trio of Scott Henderson, Jeff Berlin and Dennis Chambers hit our shores, playing to a small but appreciative crowd of fusion fans.

I’ve watched Scott Henderson’s career closely from the time he was with Jeff Berlin and Vox Humana, Chick Corea’s Elektrik Band, Jean-Luc Ponty, Zawinul Syndicate, on through Tribal Tech and up to his blues guitar forays of the last 15 years or so.

But the Scott Henderson I witnessed last night was a re-invented revelation. Playing with a fury and controlled abandon rivaling vintage Jeff Beck, he propelled the band through Miles Davis’ All Blues, Billy Cobham’s Stratus, Wayne Shorter’s Fee-Fi-Fo-Fum and Coltrane’s Giant Steps in addition to the trio’s original tunes. I reckon playing all that soul-baring blues for so many years has rubbed off on his fusion style as well.


Henderson also seemed to have developed a new-found relationship with the whammy bar, using it to bend up to and from notes, giving his playing a soaring, almost vocal quality -- in fact the bar rarely left his picking hand for most of the two-hour long set. And I should mention that despite his vigorous use of the whammy bar, his Suhr guitar hardly went out of tune, requiring only minor tweaks between songs.

And I also learned something invaluable from bassist Jeff Berlin last night. He could play a cascade of notes ripping through Giant Steps and have it speak with as much authority as he would playing a simple blues line or a bass chord-melody version of Tears In Heaven (yep, that song), which he pulled off as a beautiful duet with Dennis Chambers. At the center of it all was his impeccable sense of time -- the structural foundation of his playing. And here's guy who eschews practicing with a metronome..
That same sense of timing translated perfectly to his onstage banter. (My favourite of his one-liners: “I’m a musician with a past – I never took drugs.”)

He begins a joke by setting it up perfectly with a simple premise:

“A rock bass player was about to spank his son when his wife intervenes. “Why are you spanking your son?”, she asks.
The tone of Berlin’s voice is low, almost serious.

The rock bass player replies “Because he turned one of the tuning pegs on my bass.”
Berlin allows it to sink in, allowing the audience to soak it up.

“So why don’t you just retune it?” she asks.
At the absolute perfect moment, he delivers the punchline like Joe Frazier flooring an opponent.

The rock bass player replies, “Because he won’t tell me which tuning peg he turned!”
Jeff Berlin could easily carve out a career in stand-up comedy. And I mean that in the most respectful way. He has got to be one of the most engaging human beings alive.

After the show, when most of the fans had left, I could only put in about 5 minutes with Scott Henderson. I actually had a bunch of questions I had put together, on the off-chance that I would be able to interview him for this article.

He looked really tired. And no matter how great your sidemen are, the guitar player in a trio format always has to go the extra mile or three to make things interesting.

I told him about how I had seen him play at La Ve Lee’s with Dave Carpenter, Scott Kinsey and Joe LaBarbara in 1998. Scott talked about the closing of that club due to a structural defect in the building’s roof. I could tell he missed the place, having held a weekly residency there for a number of years. La Ve Lee had become the ultimate musician's hang for LA's session elite as well as for the many GIT students that passed through year after year. And he grew somber when he mentioned bassist Dave Carpenter’s passing in 2008.

It wasn’t long before the trio was hustled back into the empty auditorium by the organizers and out the backstage door where their transport back to their hotel awaited.

Kudos to Heads Up for pulling this gig together!

Posted by Clinton Carnegie at 8:42 PM