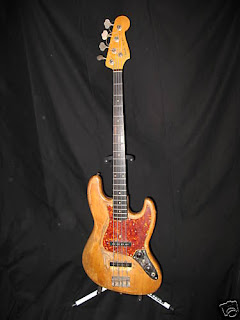 Ok. Let me sit back and take a deep breath. This is pretty amazing.


Apparently, Jaco had a unique arrangement with owners who had basses he liked -- he would set them up according to his personal preference and come around to play them whenever he was in the vicinity.
And there were several such basses around the country -- which probably helped since Jaco was often known to be without an instrument having hocked it for various reasons.
And according to no less an authority than Mark Egan, Jaco liked this particular bass so much that he wanted to make it a fretless, but the actual owner declined any such modification.
Egan, who knew Jaco well, actually played a Jaco-modified fretless bass, a gift from Jaco himself, 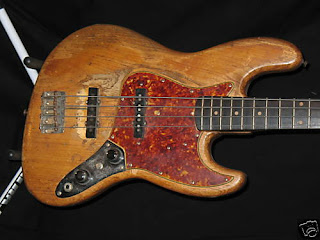 on the first Pat Metheny Group album.
I'm really digging the heavy thumb-wear over the bridge pickup, worn well into the wood.
You can almost smell the mojo.


For many bass players -- and for some of us guitar-playing Jaco fans -- this is akin to discovering the Holy Grail, the Shroud of Turin, the Dead Sea Scrolls or a Hendrix Strat.
Now if this bass could only talk..

Posted by Clinton Carnegie at 4:08 AM