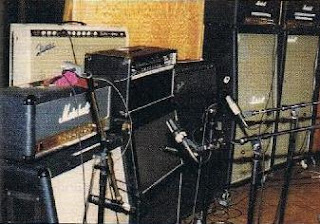 Stevie Ray virtually redefined the sound of blues guitar. His fanatical attention to tone and the measures he took to get it are legendary.

The pic at right was taken during the In Step recording sessions by SRV's amp tech, the late, great Cesar Diaz -- the 'Amp Doctor'.


Stevie's amp setup from left to right were:

The speaker tally for this setup is interesting -- an 8x10 cab, two 4x12 cabs, a single 12" in the Twin, a 4x15 cab and two 15" speakers in the Vibroverbs. With eight 10", nine 12" and six 15" speakers, Stevie Ray could cover the entire sonic spectrum. His fondness for 15" speakers no doubt contributed greatly to his full-bodied, beefy tone.

For the In Step sessions, Stevie also relied on his ever-present Ibanez TS808 Tubescreamer, a Vox wah, a FuzzFace and an Octavia which he used in tandem with the Tubescreamer.

The Tubescreamer took a toll on his amplifiers which were already turned up to the point of breakup -- he would set it up so that it hit his amps hard with a hot, clean boost. According to Stevie, coupled with his heavy technique, and .013-.058 strings tuned to Eb, "I give my amps between two weeks to a month, and then they sound horrible."

Gear aside, the real secret to SRV's tone was in his hands. He could have plugged into a Fender Champ and still revolutionized the blues.

Posted by Clinton Carnegie at 7:38 PM