The late English guitar-maker Tony Zemaitis made a name for himself by building custom guitars for the likes of Eric Clapton, Ron Wood, Spencer Davis and George Harrison. 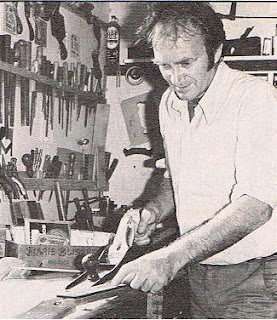 Originally a cabinet-maker, Zemaitis developed a keen interest in guitar building. And because he couldn't afford a first guitar, he built his own.


His guitar-making hobby soon turned into a full-time business. He was building each and every guitar himself and at his peak he was building around 30 guitars a year, with customers having to wait about a year to receive their custom instruments.


He produced 3 broad categories of instruments -- a basic standard (that he sold for 175 British pounds in the '70s); a medium-grade instrument with better quality woods and hardware and finally his top-grade custom model with all the trimmings.

And trimmings were probably the most obvious outstanding feature of his instruments.


Famous for his pioneering use of hand-tooled, engraved metal faceplates, they became an almost standard feature on his guitars. Custom instruments were further adorned with mother-of-pearl and sterling silver. With the exception of the tuners, he made all the hardware on his guitars himself, machined out of solid blocks of aluminum alloy.


For pickups he favored Gibson humbuckers, or, if the customer requested them, Fender single-coils. Each pickup received extra-shielding before installation to minimize noise.


Ebony fingerboards were de facto. Body woods on his top-line models were usually mahogany but he also used rare Honduran cedar which more often than not had a prior life as wall wood-panelling! Finishing was complete after no less than 40 coats of varnish.

Under license from Tony's estate, Greco has been producing a line of Zemaitis guitars for a few years now. In cooperation with Danny O'Brien, the metal engraver who worked closely with Zemaitis in producing the ornate designs on the original guitars, Greco is carrying the torch and making faithful reproductions of the originals.


And being Japanese, they are being made cosmetically perfect in every way. And probably sound just as good, with a consistency of tone far greater than the originals.

I have a friend who owns an original Zemaitis, and I've had the chance to see a couple more up-close. The original Zemaitis guitars were not perfect. In fact they had a decidedly 'home-made' quality to them.


Imperfections were everywhere -- roughly-sanded spots and tooling scuffs in the finish, engraving imperfections on the metal faceplate and trimmings and somewhat rough-hewn hardware.


You might say that Tony poured his heart and soul into every instrument he made.
Posted by Clinton Carnegie at 2:58 AM