The Orange Squeezer And The Dynacomp -- A Tale of Two Compressors 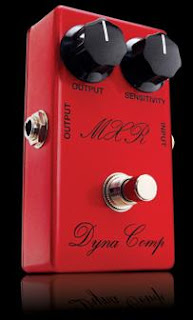 Back in the 70's there were two compressors of note -- the Dan Armstrong Orange Squeezer and the MXR Dynacomp.

Plainly speaking, the Orange Squeezer was the more sought after of the two by tone connoisseurs.

But the Orange Squeezer had a major downside. It wasn't a floor-dwelling stompbox but a small box with a right-angled 1/4" plug that connected directly to the guitar's input jack -- not a viable option for Stratocaster players because of the Strat's recessed input jack. It also wasn't very adjustable having just one flip switch to turn the unit on or off.

But it did sound pretty good.

The choice of top studio guitarists of the day such as Tommy Tedesco, Jay Graydon and Lee Ritenour, the unit's characteristic slightly exagerrated compression appeared on many a hit album. Ritenour was often photographed with an Orange Squeezer attached like a permanent appendage to his red Gibson 335.

But nearly non-existent marketing and poor distribution meant an early ride into the sunset for the original Orange Squeezer. Although there were attempts at re-releasing the Orange Squeezer by Mutron in the late 80's such as the one pictured here (Pic Source: AnalogMan), the lack of availability of the the original IC chips meant that similarities were little more than cosmetic. 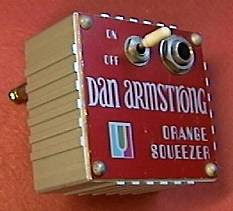 Throughout the 70's and 80's MXR, on the other hand, was aggressively marketing its comprehensive line of effects pedals for the modern guitarist, including phasers, flangers, choruses and distortion boxes.

The Dynacomp, the company's flagship compressor pedal, was a strong contender and was the standard pedal that appeared on many pedalboards long before the mass marketing and profileration of the Boss pedal line by Roland Japan in the late 70's.

Fast forward to 2009 and Dunlop Mfg., the present owner of the MXR brand, has reissued the '76 Dynacomp in all its vintage glory.

With the original thin-script lettering framed against the familiar matte red box -- along with a true-to-the-original lack of an LED indicator -- this pedal is more than a mere cosmetic reissue.

According to Dunlop, the internal components are identical to the original -- from the handmade wire harness to the original out-of-production 'new old-stock' CA3080 IC chip. Because of limited availability of this chip, the Dynacomp reissue is being produced in a limited run by the MXR Custom Shop.