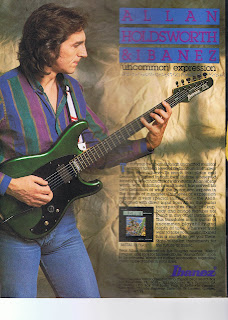 Determined to become the industry leader in a burgeoning guitar market, Ibanez started developing a roster of endorsees in the mid '70's.

Artists such as Bob Weir, Steve Miller and Paul Stanley played existing models from Ibanez's catalog, aesthetically modified with tons of inlaid mother-of-pearl, or in Stanley's case, with inlaid pieces of broken mirror.


In 1977, Ibanez collaborated with George Benson to produce the first of their artist-designed guitars -- the GB10 and GB20.

Ibanez had yet to sign on rising-star Steve Vai -- arguably the company's most famous endorsee -- who was still mainly playing his Grover Jackson-built Charvel and Tom Andersons.


The AH10 model was designed in collaboration with Allan Holdsworth in 1984. Holdsworth had very clear and radical ideas as to what he wanted in a custom instrument:
The AH10 and AH20 were only available for about 2 years making these guitars very sought-after by Ibanez afficionados.

Posted by Clinton Carnegie at 12:33 AM