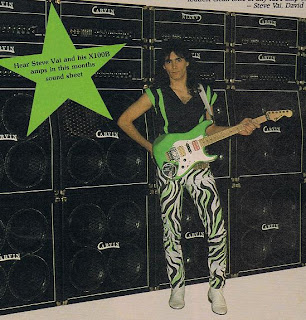 In an earlier article I spoke about the mysterious connection we guitar players sometimes have with certain instruments.


These special instruments emit a special vibe, feel great in our hands and make us play beyond our abilities. Or perhaps, more accurately, they make us realize our abilities.

Case in point, Steve Vai and his now legendary Charvel 'Green Meanie' (Serial No. 3733), shown above in an early 80's Carvin amplifiers ad.

Legend has it that Vai was in Grover Jackson's workshop talking about getting some new guitars made when he happened upon Grover's personal Charvel. Vai liked the guitar so much he asked to borrow it. Legend also has it that Grover never got the guitar back.

Originally finished in a light amber sunburst, Vai soon set about putting his personal 'touches' on the instrument.


The guitar was refinished a 'Loch Ness Green' and a cavity was carved out into the body under the back end of the Floyd Rose by Vai himself to facilitate radical pull-ups on the whammy bar.


Later on, the lower cutaway on the guitar was sanded deeper to allow easier access to the upper frets as shown in the stage pic from David Lee Roth's Eat 'Em and Smile tour at right.

Vai also added a piece of foam to the upper bout of the guitar near the bridge to enable him to rest his right wrist on the body of the guitar -- the Floyd Rose was not recessed and sat high off the face of the instrument, interfering with his picking hand.


An interesting pictorial timeline of the evolution of this guitar can be found at the Jemsite here.

The Green Meanie was to be his main instrument both onstage and in the studio for several years.


Said Vai of his beloved axe, "It's so ugly that it's beautiful; it's got a personality of its own. Pretty soon it's going to grow legs and walk away from me."


And when his considerable collection of guitars was stolen from a rehearsal studio during preparations for the Eat 'Em and Smile tour, the Green Meanie was spared because Vai always had the guitar with him.


Sadly, the guitar was damaged irreparably while Vai was warming up for a David Lee Roth show at Madison Square Garden -- the entire Floyd Rose vibrato was "ripped right out of the guitar". Vai then called upon famed Los Angeles guitar builder Tom Anderson, who was then just starting out with his fledgling company, to build a replacement based on the Green Meanie's specs.


And indeed, the forthcoming Ibanez endorsement deal that Vai signed in 1987 was a culmination of design ideas that grew out of both the Charvel and the Tom Anderson.

Posted by Clinton Carnegie at 8:27 PM