This installment of Refinishing My Les Paul BFG will finally reveal the completely resprayed guitar top in vermillion nitrocellulose lacquer!

According to Luca Quaquarella, the luthier who did the refinishing job -- and who was also featured in his very own interview in my last post -- the most difficult part of this project was sanding the top of the BFG completely smooth.

In his own words, he sanded off "a hell of a lot of wood!"

After he mixed the right proportions of red and orange nitrocellulose, Luca applied many coats to the top, wet sanding between each coat. Bear in mind that only pure nitrocellulose lacquer was used.

Gibson now uses a nitrocellulose that has a good amount of plasticizer mixed in to give an impeccably shiny surface. Pure nitrocellulose will 'sink' into the pores and surface imperfections, so no matter how many coats you use, the same type of mirror-like nitro-mixed-with-plasticizer shine can never be fully achieved.

I wanted to keep the back of the BFG in its semi-raw state. I felt that sanding it smooth and filling in the pores of the mahogany back would affect the sound of the instrument too much and suck some of the liveliness out of it. If you read my Larry Corsa article from a while back, he talks about the very same thing, and I'm totally with him on this.

And after all, it is a beautiful one piece mahogany back that is simply gorgeous to touch!

I also didn't want the neck refinished for the same reason but I did ask Luca to roll the edges along the entire length of the fingerboard on both the treble and bass sides. Rolling the fingerboard dulls that sharp 90 degree angle of the edge of the fingerboard so that it feels slightly rounded to the touch.

Again, true to the spirit of the Barely Finished Guitar concept, Gibson had left out this very important step.

As far as guitars, I can get used to almost anything. Set me up with minimal fingerboard relief, get the string height medium-low and the intonation in the ballpark, and the guitar is pretty much ready 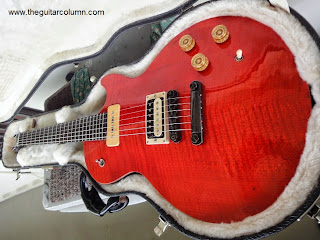 to go as far as I'm concerned.

And if the frets don't draw blood, it's a bonus.

"The Gibson Firewood. A Few Steps Beyond Aged-Relic. It's Firewood!"

Perhaps not the best marketing campaign for a new Les Paul model.

Luca also thoroughly cleaned and oiled the fingerboard and the back of the neck removing a lot of built-up crud from the fingerboard. He also took a razor blade to that hard-to-clean-spot right next to each fret.

And according to Luca, there was a lot of crud!

During my younger days, I would take all the strings off my guitar every six or seven months, and give the fingerboard a good scrub with a stiff toothbrush and lemon oil to remove every bit of crud. Those days are over. Life is just too short.

Stay tuned to Refinishing My Les Paul BFG Part 5 where we will get a cool custom pickguard by MojoAxe installed, as well as a complete rewiring done to do away with that dang killswitch! 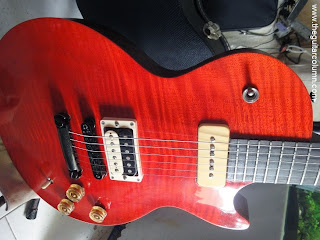 And if you haven't already read the earlier installments, catch up on Refinishing My Les Paul BFG Part 1, Part 2 and Part 3
Posted by Clinton Carnegie at 7:10 AM