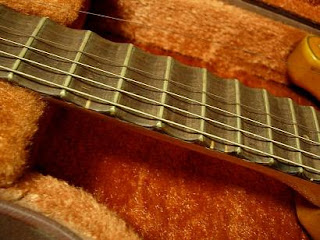 I saw this post on I Heart Guitar and was reminded of a similar scalloping procedure I performed on my unsuspecting 1984 Ibanez RS1300.


The fingerboard edge at the 9th fret had received a nasty ding from a falling cymbal during a rehearsal and I decided to conceal the damage -- with possibly even more extensive damage..


At about this time -- this would have been 1989 -- Fender had just released the first Yngwie Malmsteen signature Stratocaster. I got a good close look at the fingerboard of this guitar at the store before trying out the scalloping procedure for myself.


At the very worst, I figured, I would just replace the neck on the Ibanez.


I didn't actually know what tools to use so I made a quick trip to the DIY store where I found a semi-circular file, a rat-tail file and a few sheets of sandpaper of varying grits -- about eight dollars in all!


I used the semi-circular file on the wider frets -- the 1st fret to the 11th fret, or so -- and the rat-tail for all the frets beyond that.


Figuring that the upper frets would be easier to scallop since they were roughly the same width as the rat-tail, I started on the 22nd fret and slowly worked my way down from there. After about an hour I had scalloped the fingerboard from the 14th to the 22nd fret!


After smoothing out the file marks with sandpaper, I rubbed on a few drops of lemon oil to moisturize the wood. This really brought out the lustre of the scalloped wood.


The next day I decided to work on the remaining frets.


Scalloping the wider 1st to 11th frets was a little more tricky. Using the semi-circular file I really had to watch what I was doing and not take off more wood than necessary. From the pic you can see I went a bit too deep and lost some of the dot inlays in the process -- but who needs those anyway, right?


When I went back to the guitar shop the following week to take another look at the Malmsteen signature I was surprised at how shallow the scalloping now seemed to be, compared to my handiwork. Hmmm...


Once my main axe, I had put the 'ol RS1300 away for years and had only just brought it out to snap the picture -- hence the rusty and broken strings.


It reminds me that I have more guitars than I will ever use..

Posted by Clinton Carnegie at 12:18 AM