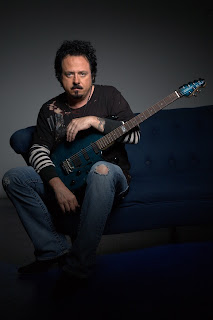 Randy Brecker's Soul Bop Special Edition is in town for a concert, featuring the guitar pairing of Steve Lukather and Robben Ford!  Are we lucky or what!

Playing his new copper-gold Musicman Luke into a rented Marshall JCM2000 Triple Super Lead head, Steve Lukather showed us why he was still a player to be reckoned with, in this up-close and personal guitar clinic.

Starting his clinic 25 minutes late for some undisclosed reason, and after an informal self-introduction, Lukather launched into a beautiful, moving chord-melody solo based on Larry Carlton's  It Was Only Yesterday.  Reminiscent of Carlton's own chordal intro on the same track from the live Paris Concert dvd,  Luke laid it all out for us to hear with emotion, nuance and absolute control over his instrument.

Channel-switching his Marshall to the 'red' high gain channel, he next unleashed a barrage of classic Lukather-isms -- slinky pentatonics and wah inflected licks -- before playing some Jeff Beck-style pseudo-slide-guitar using the whammy-bar to gliss between notes.  Here's a guy who makes it point of learning something from everyone he can!  Bringing things down, Lukather closed off with a near note-perfect rendition of Jimi Hendrix's guitar outtro from Castles Made Of Sand.  And that was just the beginning!

Despite his volume I was surprised by how warm his sound was -- a far cry from the searing, high-gain, mid-range scooped Steve Lukather tone of old.  Nice.


Self-deprecating as usual -- "I'm just jammin', goofing off" -- Lukather came across as someone who obviously still loves playing the guitar.  By his own admission still the eternal student, it was refreshing to see a musician of his caliber still re-inventing himself on the instrument.  After 35 years in the music biz, most cats would be kicking back in the producer's chair and thinking about where to go to later for dinner.

Luke's pedal rig was modest by any standard -- an Ibanez Tube Screamer, two Boss Digital Delay pedals for long and short delays, a Providence Chorus and a Boss Tuner pedal.   And according to him, rental amps were an economic necessity in this age of high airline freight charges -- "It would cost $20,000 just to ship my three road cases over here!"

Turning to his new copper-colored Musicman Luke guitar -- "I'm not sure if I like the color; it kinda looks like my 2 1/2 year old baby's poop!" -- he talked about his current disdain for Floyd Rose bridges and their inherent string-changing hassles, opting instead for a non-locking floating bridge on all his current Musicman guitars.

He then demonstrated the range and tuning stability of his Musicman's traditional fulcrum trem with Jeff Beck's Where Were You and more faux slide-guitar licks -- "When Jeff Beck does that stuff, he sounds like God's guitarist!"  Luke even gave us a little background on Beck's fingers only technique.  Apparently Jeff had told him that he dropped his pick playing live on the Ed Sullivan Show on TV and swore after that that he wouldn't rely on a pick anymore.  "With Jeff, it's all in the right hand.  Put a pick in his hand and he doesn't sound like Jeff Beck."  Interesting!

When asked about his work on Michael Jackson's Thriller album, Luke launches into the famous Beat It riff.  He states matter of factly, "I did all the grunt work on that track; I played all the (rhythm) guitars.  I even played bass!  But Eddie gets all the love."  Luke even goes into an uncanny impersonation of Michael's personal phone call to him to play on the Thriller sessions, hanging up on him three times thinking it was a prank call!

With Eddie Van Halen having laid down his solo -- but refusing to play over a certain section of the song that was eventually edited out -- Lukather set about re-recording the basic rhythm tracks with a barrage of heavy Marshall tones, "I mean we had Eddie Van Halen playing on it, right?"  But according to Lukather, producer Quincy Jones wasn't thrilled with the wall of heavy guitars and instructed him to re-cut the guitars so the track would fit in on the R 'n B radio format.  "So we took off the barrage of Marshall amps from the track and brought out our little Fender Princeton's."  He seemed reluctant when prodded to dish the dirt about Jackson, offering little more than "I saw him kind of change -- facially.."

And Lukather really got animated when someone asked a question about the rampant use of digital editing in recording, obviously one of his pet peeves.  "People criticise Toto's records for being too slick, but we were all playing live in the same room together.  We overdubbed some solos and background vocals but that was about it."   Referring to the ubiquitous ProTools recording system, he said most artists these days lacked the talent to get a decent take in the studio, choosing instead to 'Tool it.  "Back then you had to be good (to make a record).  Then MTV came along and you had to be good, and pretty.  Now you just have to be pretty."

Closing his guitar clinic with a verse of Hendrix's Little Wing, which he sang through the driest of guitar clinic PA's, Lukather talked a little about the virtues of slow and deliberate practice.  "Think of music like sex, take your time and take it slow."

Words to live by indeed.

Stay tuned for my review on Robben Ford's clinic tomorrow!

(Pic Source:  http://www.stevelukather.net/)
Posted by Clinton Carnegie at 5:44 AM