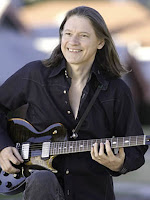 Jet-lagged and appearing a little surprised at the unusually vociferous welcome at his sold-out guitar clinic, Robben Ford strapped on his black Sakashta and plugged straight into a Fender Super Reverb amp.  And for the next hour and a half, he proved once and for all that tone comes from the head, heart and hands.  The man exudes soul.

Describing his style as 'freeform but with a method', Robben began by talking about his early years studying the saxophone.  Growing up in the small town of Ukiah, CA, he listened to the local radio station, KUKI, "or kooky", as he says with a laugh.

His parents also joined a record club.  "And in there was Ravel's Bolero and Brubeck's Take 5.  Take 5 was a big hit and that was what made me want to play the alto -- listening to Paul Desmond.  I played sax for 10 or 11 years but I'm a self-taught guitar player.  I learned to read music on the sax but somehow that never really transferred over to the guitar.  I taught myself by just beating on the guitar!"

Listening to the first Paul Butterfield Blues Band album featuring Mike Bloomfield proved to be turning point.  "For a while I sounded a lot like Bloomfield."

"I play this combination of folk-blues and jazz -- kind of a mushed-up style.  I had the pleasure of touring with Joni Mitchell and the pianist on the gig was Roger Kellaway.  I was playing on a piano backstage, doing my thing on a 12-bar blues, throwing in 13b9 chords.  Roger came in and stood there with his arms folded.  Roger started laughing and said, "Make up your mind, man!"  I never changed.  I doubt I learned a thing from that."

Elaborating further, Robben described his guitar style as 'fingerpainting'.  "You've got a white piece of paper and you kinda mush the paint around and see what comes of that.  And you must be expressive and make mistakes.  If you don't it comes from a place of technique and not from a place of feeling.  There are some great players out there, but I don't feel it."

When asked about his practice schedule, Robben replied, "There was a time I used to practice.  It was a very short time -- I did it for 6 months!  On the cover of the first Paul Butterfield Blues Band album was a picture of Bloomfield playing a 9th chord.  When I learned it, I just played the shit out of that chord!  I didn't know many chords at the time so I got hold of a chord book -- Mel Bay's Jazz Chords Vol. 1.  When I was playing with Charlie Musselwhite I started using all these chords in that band."   Robben then launched into an elaborate jazz-blues progression throwing in a multitude of chord substitutions into mix, before pausing at the end and exclaiming, "Shit, I've changed keys!"

"I learned some scales and some standard bebop licks.  You can pretty much boil everything down to  ii-V progressions.  It's actually not complicated -- the language of music is very simple, you can understand those things in a couple of weeks.  It's not like learning French that can take years."

Emphasizing the need for simplicity and the importance of finding one's own voice, Robben proferred, "People learn Herbie Hancock and Coltrane licks and they can blow your mind.  But will it ever evolve into their own voice?"

"Doing my own thing has kept me unique.  I had a good sense of time, rhythm and feel -- the fundamentals.  I always played loud and proud.  And sometimes strong and wrong!  I did a lot of screwing up real loud!"

Asked about his current amplification setup for tours, Robben expressed his preference for Fender Super Reverbs, explaining that his setup when he was with Jimmy Witherspoon's group consisted of a Gibson L5 archtop into a Super Reverb amp.  "With good speakers and matched tubes, the Super Reverb is my favorite.  The Gibson L5 was a big-bodied guitar.  Then I got a Gibson Super 400 which had an even bigger body.  I played on the treble pickup most of the time because I wanted it to sound like Miles Davis' trumpet."

Robben also offered his opinion on pedals.  "To find your sound, get rid of your pedals.  Take 'em away.  For a while at least.   With pedals, you're going to think that your sound is in your gear.  I didn't have pedals when I started out, so I didn't have that problem.  Pedals are the icing, not the cake so watch it with the effects."

Delving into his use of the diminished scale, Robben explained, "Larry Coryell told me about the half-tone/whole-tone scale.  I was about 18 or 19 and I asked him how he played all that out stuff.  I didn't know it was a diminished scale, but I started practicing it and made up a few of my own licks.  The b9 on the dominant 7th chord reminded me of Miles' playing."

After a tasty demonstration of some lines that outlined the changes to a blues progression perfectly, Robben explained, "The diminished scale takes you very nicely to the IV chord in a blues. Eventually you'll find the common tones moving to the next chord.  You don't want to use it on the I chord, but you can use it on the IV and V chords.  The half-whole scale (based on the root of the chord) has served me well."

Concluding his clinic, Robben Ford had this to offer, "Ultimately music comes from inside you, not from outside yourself.  It's translated through you -- it's intangible.  I'd like to help people bridge that gap."
Posted by Clinton Carnegie at 12:17 AM