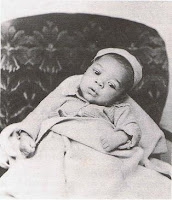 Born 27th November 1942 in Seattle, Washington, Johnny Allen Hendrix was to become one of the most iconic figures ever to be associated with the electric guitar.

His father, Al Hendrix, who had not been consulted about the naming of his son, officially changed young Johnny's name to James Marshall Hendrix on 11th September 1946.

Noticing that the young boy had a penchant for strumming on a broomstick -- for a while in fact, Jimmy and his broom were inseparable, he even took it to school -- Al relented and got him his first acoustic guitar for five dollars. 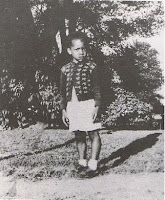 Jimmy was strumming away, teaching himself to play. He soon started hanging around the porch of a local bluesman who lived nearby, picking up whatever he could. This mysterious guitar-slinging bluesman no doubt had a great impact on Jimmy.

After playing for a couple of years and hankering for an electric guitar, Jimmy persuaded Al to get him a white Supro electric guitar. Soon he was playing at local gigs and parties around Seattle.

Joining the army for basic training in 1961 as part of his duty to the country, Jimmy eventually got posted to the 101st Airborne Division at Fort Campbell, Kentucky. It was in the army that Jimmy was to meet fellow serviceman and bassist Billy Cox. The two put a five-piece band together and, as the King Kasuals, started entertaining soldiers in the Service Clubs, with the occasional gig around town.

After 14 months, a broken ankle and a feigned back injury got Jimmy out of the paratroopers in 1962.

Moving to New York's Harlem district, Jimmy took on the stage name Jimmy James. Times were lean and Jimmy took whatever gig came his way. In 1964, Jimmy was offered an audition with The Isley Brothers after being spotted at a club where he would often beg to sit in with the resident band.

Jimmy was hired and recorded the single 'Testify' with the band. A tour immediately followed and Jimmy found himself playing before stadium-sized audiences. On a tour back to his hometown of Seattle, Jimmy

missed the bus back to New York and also had his guitar stolen. Once back in New York, he purchased his first Fender guitar, a Duosonic, from Manny's Music on 48th Street.

Quitting the band in 1964 -- Jimmy felt the Isley's had too many rules, especially when it came to dressing and choreographed dance routines -- he found himself drifting once again. Changing his stage name to Maurice James (!), Jimmy eventually found himself in Little Richard's backing band.

Jimmy soon realized that he had stepped into another regimented musical outfit, worse than his experience in The Isley Brothers.
Little Richard was a star, and he did not like to be outshone, let alone by his own 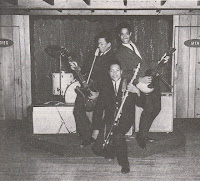 sideman. Jimmy's flamboyance onstage, coupled with his wild hair and colorful dress-sense made for an uncomfortable situation in the Richard camp.

While on a break from Little Richard, Jimmy did some gigs with Ike and Tina Turner. Ike too saw that Jimmy was stealing the show and dropped him. By this time Jimmy had also been fired from his gig with Little Richard.

Arriving back in New York, Jimmy wrote this piece of prose:

Joe Ad-lib, it would seem, would be discovered while playing to an empty house at the Cafe Wha? in Greenwich Village by the ex-bassist for The Animals, Chas Chandler. Chandler had just just gone into the management business and was looking for new talent to boost his music management portfolio. Signing on Jimmy, Chas brought him to England on 24th September 1966.

With only a Fender Stratocaster and a change of clothes, Jimmy descended on London's bustling music scene. In a very short time, Jimmy's name became a buzzword, and rock's royalty -- Eric Clapton, Paul McCartney, Mick Jagger, Brian Jones, Pete Townshend and Jeff Beck -- had been won over and become ardent, although sometimes begrudging admirers. 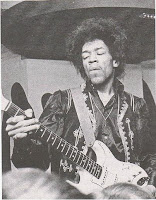 When Jimmy came to London he had reverted to this real surname. It was Chandler's idea to change the spelling of his first name to Jimi to make it unique and memorable.

With the trio of Jimi Hendrix, Mitch Mitchell and Noel Redding, the Jimi Hendrix Experience was born.
Happy Birthday Jimi. In one short lifetime, you taught us several lifetimes of lessons. 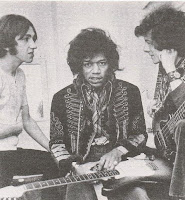 Posted by Clinton Carnegie at 3:38 PM