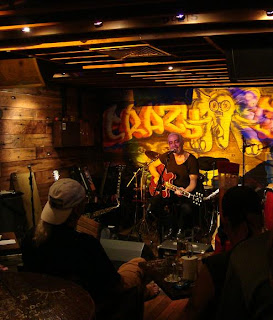 Originally from Corsica, Henry Padovani came to London in the mid-70's looking to make a name for himself in the burgeoning punk-rock scene.

In 1977, after auditioning with future members of Culture Club and getting the gig, he turned the band down in favor of Stewart Copeland's offer to form a power trio with a singer-songwriter-bass player from Newcastle by the name of Gordon Sumner aka Sting.
After Copeland wore a policeman's jacket at the band's first photoshoot, the band decided to call themselves The Police.
After a year, the struggling band recruited guitarist Andy Summers and The Police became a 4-piece group. The fateful decision to drop Padovani from the band came shortly after Summer's joining.
The rest, as they say, is history. 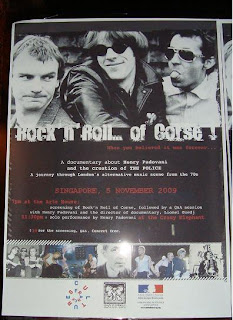 And it was a rare treat to watch Henry Padovani tonight at The Crazy Elephant.

Performing a solo set for almost an hour and a half with just a guitar and his soulful, gravelly voice, Henry took us on an extremely personal musical journey, singing in English and French, with a repertoire that covered everything from T. Rex to Nick Cave to Edith Piaf.

Alternating between a Gibson acoustic guitar (tuned D,G,D,G,B,D) and a cherry-red Gibson ES335 through a delicate tremelo effect, Padovani proved himself to be a very capable guitarist, playing blues-tinged solos as he accompanied himself on the bass strings.

Touring in support of a film documenting his time with The Police, "Rock n' Roll... of Corse!", Padovani is nothing but grateful for being part of London's scene in the late 70's -- "It was a great time!", he told me with a wide smile.

Now living in Paris, Henry plays frequently in London with his band The Flying Padovani's, performing what he describes as 'Link Wray-type stuff'.

So how does a self-professed punk-rocker reconcile himself to singing ballads with an acoustic guitar? "You know, these are great songs. Sometimes when I play them, I go somewhere else. And when I come back down to earth, I go "where the f--k am I?"
www.henrypadovani.com
Posted by Clinton Carnegie at 3:04 AM