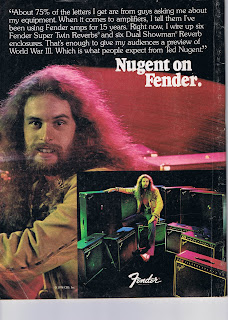 In the previous article I discussed the joys of bi-amping. In that case, six amps rated at 180 watts each, and six cabinets each loaded with two 15" speakers must surely be the road to nirvana.

But the late '70s were an innocent time. Bands were competing for decibel records at their live concerts and tinnitus sounded like something one got from eating a tainted can of Spam.

If we are to believe the content of this ad, Nugent was easily putting out well over 1000 watts of raw volume from his guitar -- a Gibson Byrdland hollowbody jazz guitar no less, stuffed with foam to dampen ensuing feedback.

Ol' Ted said he performed with a earplug in only one ear to protect that ear that was facing his amplifiers. By the early '90s he was saying that he had lost all hearing in his unprotected ear and it was "just there to balance out his face."