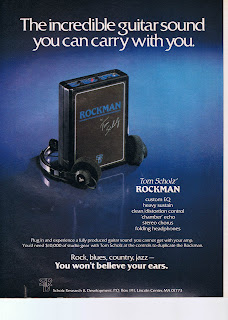 Here's a Rockman ad from the early 80's.

Tom Scholz, the guitarist and leader of rock band 'Boston' was quite the tinkerer and genius inventor.

At a time when the only way to get a decent distorted tone was to mic an amplifier, Scholz created a barrage of home-brewed electronic boxes that allowed him to plug directly into a mixer to track his monstrous guitar tones in his home studio without waking up the neighbourhood.

Also a smart businessman and savvy marketeer, Scholz soon unleashed his creation upon the world.

Advertised as both a versatile headphone amp and recording device, the Rockman soon caught on in a big way and was the secret blackbox of nearly every guitarist plying his trade in the recording studios.

When it wasn't always practical to mic up that 4 x 12 Marshall cabinet, the Rockman provided a viable alternative in the form of a DI unit from which you could also get great rock guitar tones.

Simple to use, there were 4 mini-switches on the Rockman's control panel:


Also included was a 1/4" Aux input so you could play along with your favourite records or cassettes (!)

And not forgetting the Scholz Rockman stereo headphones which were supplied with the unit. Mine still work after 25 years.

A cool feature was the red LED power light that blinked at 1-second intervals in a constant hypnotic manner.

The only downside to the Rockman was that the only outputs were 2 parallel stereo mini-pin headphone jacks, which meant one had to deal with dinky hi-fi cables with stereo mini-pin to dual mono 1/4" plugs in order to interface with a recording console.

The unit ran on 8 'AA' alkaline batteries (yikes!) or more economically off a wall wart that cost about a third the price of the Rockman unit itself!

The Rockman's clean and distorted tones became the hallmark of many an 80's hit song. The Clean tones were incredibly glassy and crystalline and really cut through in a rhythm track, especially with single-coil pickups. I would get a Rockman again to use it solely for this sound.

The Edge and Distortion tones were very processed sounding like the ads claim, but provided good utilitarian tones for the obligatory 8 or 16-bar guitar solo mid-song if one was so inclined. Think Michael Sembello's guitar solo on 'Maniac'. (If you can remember that far back..)

If like me you're nostalgic for some good ol' 80's guitar tones, Dunlop has reissued a version called the Rockman Guitar Ace.

Rock on!
Posted by Clinton Carnegie at 3:12 AM