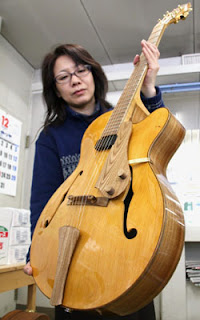 A 90-foot tall elm tree that was battered by a typhoon in 2004 and then destroyed by heavy rains in 2006 has found a new lease of life as an archtop guitar.  The 300-year-old historic tree, which was awarded '100 Giants of the Forest' status in Japan, once stood as a proud symbol for the town of Shimokawa in northern Hokkaido.

After deliberation by the town's council, it was decided that guitar luthier Naoto Odashima would be commisioned to construct a guitar out of the tree's remains.  The archtop-style guitar was completed in October 2009 and has been played by a number of local musicians in Shimokawa.

Here's a list of standards that probably shouldn't be played on this particular instrument:

With a fallen historic tree that large I would think that they would have managed to knock out a few additional solidbodies like this hand-carved Ibanez Artwood Nouveau from the mid-70s.

Posted by Clinton Carnegie at 6:06 AM