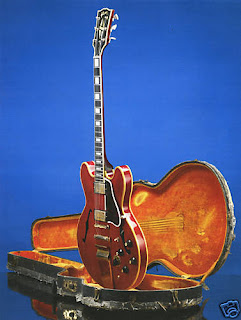 Here's a 1967 Gibson ES355 that, according to the seller, was owned by the late legendary bluesman Freddie King!  (Item #: 180375852258)
The ES355 was intended to be a deluxe version of the ES335 and featured an ebony fingerboard, pearl block inlays, gold-plated hardware, six-position Varitone and multiple binding on the body, neck and fingerboard.  The headstock was also adorned with the Les Paul Custom-style 'split-block' pearl inlay.

The Gibson ES355 also came with a 'Stereo' feature with discrete outputs from each pickup that could be sent to two separate amplifiers.   Freddie kept his pickup selector switch in the middle position --both pickups 'on' -- and played through a Fender Quad Reverb amp.


The ES355 was Freddie King's main axe of choice for most of his career, although he did on occasion also play ES335s, ES345s and Les Pauls.

This particular ES355, serial number 580445, dates from 1967.  According to the seller, Freddie had its Vibrola trem removed and replaced with a stop bar tailpiece.


With a Buy It Now price just shy of 50 grand, this guitar comes with a letter from a roadie who travelled with one of King's opening acts, as well as a road-worn, duct-tape reinforced hardcase stencilled with 'Freddie King, Texas Cannonball, Fragle (sic)' 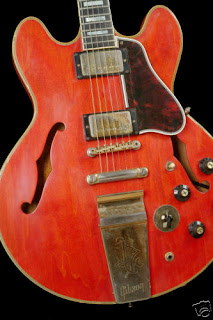 Posted by Clinton Carnegie at 5:13 AM