I remember seeing a picture of Dann Huff in an article in Guitar World magazine in the late 80's.  It was a writeup about his band Giant, and in the accompanying pic he was brandishing an early Strat-headstocked JamesTyler guitar, with the then-obligatory Floyd Rose tremelo, and an assortment of mini-switches on the pickguard.

I remember thinking, "What on earth is that thing?"

Reading further, Huff talked about how he gave his instruments to a certain Jim Tyler to be hot-rodded.  I came away thinking that Tyler was the guitar world's equivalent of some muscle car hotrod guru.  After all, these LA session cats wouldn't give their prized bread-and-butter instruments to just anyone to fool with right?

And check out that crazy headstock logo! 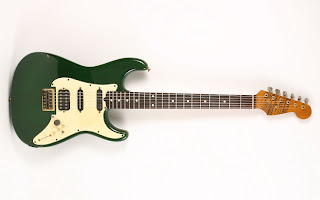 Fast forward 20-something years later and one of these babies pops up.

And there are a couple of distinguishing markings on the neck and body that are visible when this instrument is disassembled -- which might make it even more of collector's item.

'Buzz 85' is pencilled in on the butt end of the neck just below the nut for truss rod adjustment, which leads to speculation that it may have been a custom instrument built for Buzz Feiten.  Before he made a name for himself as the creator of the Buzz Feiten Tuning System (BFTS), Buzzy was an LA session guitarist and a frequent visitor to Jim Tyler's workshop.

And another thing.  The body and neck for this particular guitar were made by luthier Phil Kubicki and not by Tyler himself.  Hmmm.  The plot thickens.  Maybe he was outsourcing in the early days.

In addition to the standard volume pot and 5-way switch, this guitar features 3 mini push/push button switches to split the coils of each pickup as well as a single mini-toggle switch, sometimes called a Blaster switch, which bypasses all 'pre-sets' and activates the bridge humbucker alone, in series.

Real effective for going from a chimey strat tone to an all-out, balls-to-wall crunch for that lead solo!  It's also interesting to note that this pickup switching system is one of several configurations which Tyler still features on some of his current models.  A 9-volt battery is needed to power the onboard Demeter preamp.

According to Tyler Guitars, they only switched to their current headstock design in 1987, which would make the '85 date marking on the neck period correct.  Unfortunately they weren't able to provide any information as to who this guitar was originally sold to.

Posted by Clinton Carnegie at 4:34 AM